Sentinels of the Skies

I wonder what images spring to mind when you hear the phrases, ‘Flight Of The Condor’ or ‘Sentinels Of The Skies’? Majestic creatures with magnificent wingspans soaring the thermals of the limitless plains? But what about the word Vulture? Probably all goes a bit ‘Meh’, conjuring images of ungainly, ruthless scroungers ready to pounce on anything that pops its clogs? But they are one and the same.

The film industry, one of our most influential mediums, plants this negative stereotype early on in our psyche, particularly through cartoon caricatures. Even a quick Google search will remind us that the word Vulture signifies, “A contemptible person who preys on or exploits others.”

What a terrible disservice we do to these shy and harmless creatures who are essential to a healthy ecosystem. Without their clean-up services carcasses would be left to rot and spread harmful bacteria, causing a sharp rise in problem-scavengers that help spread devastating cross-species diseases such as rabies and anthrax.

We know this because it’s already happening. The past thirty years have seen a dramatic ninety-five percent decline in the Asian vulture population due to poisoning by a veterinary drug given to cattle, their main food source. This has led to cattle carcasses rotting in fields and contaminating local drinking water, and to a boom in the numbers of less efficient, disease-spreading scavengers such as rats and feral dogs. Thankfully, having recognised the cause of the problem, governments have now begun to turn this around.

Poisoning has also led to a devastating eighty to ninety-seven percent decline in all eleven of Africa’s vulture species, but from very different sources. Rangers use these ‘Sentinels Of The Sky’ to help detect the location of poaching activity. The vultures’ extremely keen eyesight means that they can detect a dead elephant way before the rangers can, and very often before the poachers have left the scene, circling above the carcass to raise the alarm.

This means that poachers are now poisoning carcasses to incapacitate the vultures. The body of a single poisoned elephant can lead to the deaths of over 500 vultures, and a cattle carcass to as many as 150. But these vilified birds are also victims of the bush meat and ‘medicinal’ trade, pesticide poisoning and many lose their lives in collisions with the growing numbers of wind turbines and power-lines. The world has never seen such a dramatic and devastating decline in any bird species before.

This alarming decrease not only threatens our planet’s biodiversity and the smooth running of our ecosystems, but also the ancient cultural practice of Buddhist and Zoroastrian Sky Burials, where their dead’s final remains are generously offered to the birds in the tradition of benefiting others. Tibetan buddhists believe vultures to be an emanation of the wisdom of the deities, which we feel is a much more appropriate description of these essential and truly majestic birds.

Stampede are here to raise awareness of the plight of the often misunderstood champions of our ecosystems. Especially ones so significant and specialised as the vulture. It’s time we stopped vilifying these vital birds and start recognising them for the true heroes they are. 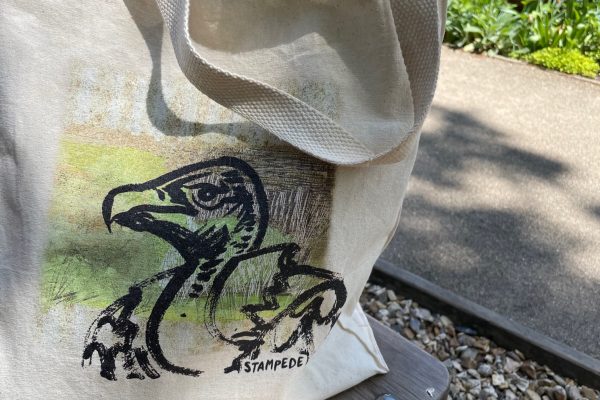 Stampede Store
Buy a gift and support the little guys